Andrea and I were married on a Saturday, did the brunch thing with guests on Sunday, took the Monday to relax and pack, and then headed to the airport on Tuesday. We overnighted in San Francisco and then on to Hawaii (the Big Island) on Wednesday. We had decided to spend about 10 days on the Big Island, splitting our time between Hilo (on the East) and Kona on the west. Since the airport is just north of Kona on the west coast of the island, we had to pick up our rental car and drive to the other side of the island to Hilo.

Despite our early morning flight to the island, we weren’t in any rush to get to Hilo. We wanted to see some of the island, and since we thought we would probably take the Southern route on the way to Kona after we were done in Hilo, we decided to take the Northern route. Going that way takes about 3-4 hours if you’re not pushing it too hard, and we weren’t.

Of course, one thinks of Hawaii as extremely lush, tropical, and well, to put it bluntly, green. The north-western part of the island looks like tundra. Don’t take my word for it, see for yourself:

Not exactly what most people think of when they think of Hawaii. But we continued on, and soon we were deep in the green belt we had expected.

We weren’t sure if we were going to get back up the Eastern coast while we were in Hilo, particularly as most of the big attractions are south of the city, so we decided that if there were any big things to see on the way, we’d stop. We hadn’t really planned much of this part of the trip, expecting mainly to just get to the hotel that day, maybe swim in the pool, etc. It was a vacation, we were relaxing!

We stopped for lunch in a condo town, and after we finally caught up to the green belt, we motored on for most of the day. A few golf courses, some small villages here and there, nothing pulling us in. Until we got to Akaka Falls. It’s a small state park not too far north of Hilo, and since Andrea and I love our waterfalls (look Panda, chutes!), we detoured from the main highway and started to climb up the side of the hills. The road was pretty good, a few small switchbacks to a plateau and then a small drive to the parking lot for the park. We hadn’t really planned on it, as I said, but in retrospect, it was probably the best thing we could have done that day. Not too taxing, and every shrub, plant and bush reminded us we weren’t in Ontario anymore.

And the falls themselves don’t suck.

Types of trees that we had never seen before.

I think I found the entrance to the cave on Dagobah! Yoda? Are you in there?

Flowering plants we had no idea the name of…

And as we were leaving the park, an iconic tree. I’ve seen pics of this tree in dozens of people’s online photo albums for Hawaii.

And if you want to see the falls for yourself, here are the videos. 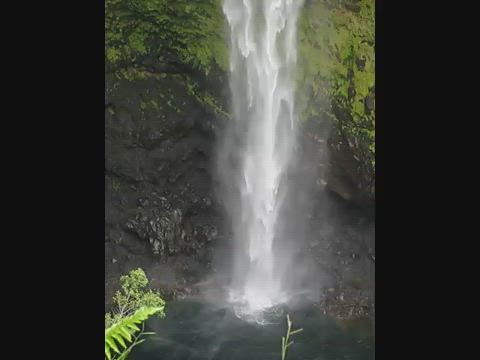 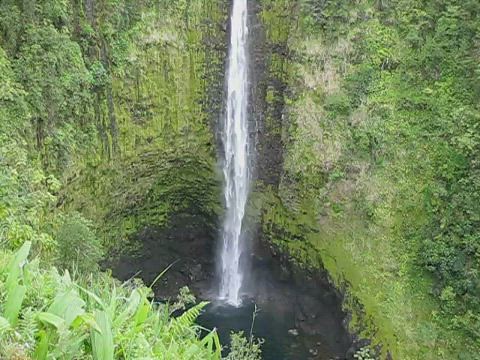 We checked into our hotel shortly after, and had a nice relaxing night. Not a bad first day…