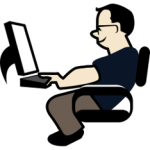 Way back at the start of November, I committed to the National Novel Writing Month goal of 50,000 words in a month.

I’ve done lots of writing in the past, never thought I’d do a binge one, but was feeling a little lethargic about my HR Guide. I want a full update for January, so I buckled down and wrote, wrote, wrote.

I had hoped to reach 70K, but life intervened. I found it difficult to write much at night, and I was using a poor physical setup to write close to my son’s computer. He was also writing and I was impressed with his commitment. Not sure how we’ll maintain that going forward, but we’ll find a way. He’s got a good idea, but keeping the faith will be hard for him.

I set a blazing initial pace, hitting 30K+ easily by the mid-point. Then, I got kind of distracted. On the last day, I was about 2000 words short of the 50K goal. So I stayed at my computer until I finished the section I was on, blazing to a final total of 50,925. I’ll do the rest after Christmas probably. We’ll see, I need to do some more planning and outlining this week so I can finish on time. I have a deadline of early January, and I really want to meet it.