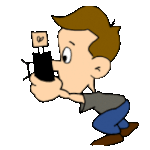 As part of my #50by50 posts, I repatriated all my videos and pictures from SmugMug, threw them into Piwigo, and (mostly) completed a good layout and design for my online photo gallery. I had tried integrating directly into WordPress, but the biggest and best (relatively speaking) gallery called Next Gen Gallery just didn’t play well with some of my other plugins, and I couldn’t get it to work right. I tried various other WP tools, but nothing was jiving for me. Piwigo worked, I found some themes I liked, I tweaked some stuff, called it a day. Then proceeded to put a LOT of time and effort into uploading 12755 photos and videos of various types and sizes.

I made it as good as I could, but it was far from “perfect”, if there is any such thing. For example, Piwigo likes to play with different size images. So it would take the original ~13K photos and make a thumbnail for each one. Plus a medium size. And a large size. Which means ~13K photos suddenly becomes ~52K files on the site. Plus the Piwigo install itself…plugins, core files, themes, etc. Call it another 3K in admin files, and I’m at 55K for the number of files. Which isn’t a problem on the one hand — my account comes with unlimited storage space. Great! Except there’s a small caveat to that unlimited storage space. It only allows 200,000 nodes which are basically file markers. 200K nodes = 200K files. I’m only at 55K, but the wrinkle?

That’s just the gallery. I also have AstroPontiac, ManagementConsultingServices, and oh, yeah, all of POLYWOGG.CA i.e. this site within the 200K too, with separate full installs of WordPress three times (that’s another story, but still). Which at one point put me close to 150K nodes. As I continue to add and upload stuff, that “margin” starts to shrink. Not a problem “yet”, but I’m looking at expanding my online presence soon, and Piwigo is taking up a lot of nodes.

Enter a new wrinkle — or two!

My hosting provider recently migrated a whole bunch of accounts to new, larger, faster servers, and my account went with it. But after it was done, for some reason, part of my WordPress install and part of my Gallery were no longer working. This is not an uncommon problem, actually. One of the downsides of running multiple installs on my server is that a couple of key files, mostly related to security, all reside in the same directory. So three copies of WordPress and one copy of Gallery all want to play in that same directory, and they don’t all know how to play nicely. When something changes for one, it can — and does — present challenges for the other installations. The three WP sites got along fine. But my Piwigo gallery wasn’t liking the new server setup.

My hoster fixed it, great. Then it broke again when something changed. So they fixed it again, great. Then it broke again. So they fixed it a third time, and it was still broke. A fourth time, still broke. A fifth time, fixed and stayed fixed. But it required a couple of tweaks that are not optimal for site operations. Not mission-critical problems, but a small design challenge, and likely to cause me problems down the road with other plugins and operations.

So, I reached back into my blog, pulled up my musings from earlier about different plugins to replace Piwigo with the idea of trying to fully integrate into my blog, and of course came across Next Gen Gallery again. Over 900,000 sites use the plugin for galleries. And yet again, I thought, “Why won’t it work with mine?”. So I gave it another go, expecting it to fail but thinking maybe this time I could devote some time and figure out what the conflict was and fix it.

Setting up NGG for my gallery

Yep, it works now. I think mostly because I’ve switched security plugins and now it likes my configuration. Or at least doesn’t hate it. Well, that changes things. I started playing with it, a few limitations that I can live with, and I decided to go for broke and buy the pro version. Also works perfectly. Relatively anyway.

Sure, I have to tweak it for setup to match my themes and blog, as I would with any plugin. There are a bunch of gallery themes, none that work well enough to replace my overall theme, so I can ditch those. There are also layout templates, some basic, some pro, and lots of tweaks that each one can do. In the end, I really like a first page which shows thumbnail images. My favorite is called the Pro Thumbnail Grid, lets me put a legacy caption below each photo, space them out more or less grid style, and also make them fully responsive (i.e. on small screens, you get 2 images across; on my wide-screen, I get 4; on mobile, just 1). I can set a default for most of the settings, change the colours to match my blog’s theme a bit more, etc.

And then choose from a handful of different lightbox settings (i.e. the way it looks when you click on a thumbnail and it opens the pic into a full image, complete with caption, social media sharing icons, and a place to comment on the picture if you want). I had to do styling tweaks on both to get the result to look the way I wanted it to look, but one of the benefits of having the pro version is that it comes with support. So I asked questions of the developers and they told me how to style some of my unique tweaks. Which then led me to figure out some of the tweaking on my own, a sense of accomplishment that pushes my ego button pretty hard. I was pretty self-satisfied with my initial progress, particularly as it has me doing some CSS style sheet tweaks that I’ve never really done before at this level. 🙂

There are still some formatting bugs to work out such as some styling of breadcrumbs on an internally-generated virtual page. I also found a great alternative layout to use for my astronomy photos. It includes EXIF data (camera setting info), which is helpful to see with each picture. I haven’t fully styled that page, but should be only minor tweaks once I get to my astro photos.

One of the ongoing challenges I have always had with my images is that a lot of the data is manually entered with the pics online. So all of my so-called meta data for captions, folder names, descriptions? They exist only in cyberspace in the database of the apps I’m using; the pics themselves do not include those descriptions. Which means when they went from desktop to SmugMug, they all had to be re-coded manually. When the photos went from Smugmug to Piwigo, a small percentage of the data went with them, but most had to be manually re-entered. Now that I’m going from Piwigo to WordPress, the spectre of potential recoding rears its ugly head yet again.

But as I went through photo editors last year including looking at photo management options, I tripped over a program called Mylio. It is not the best editor by far, but it has an advantage over others. It allows you to directly edit metadata, embed it in the photo so it never has to be updated again, and when uploaded to NextGen Gallery? It can read the info and display it. Including not only captions to go with each photo but any extra “tags” I put on the photos. Sure, there are other programs that do that, but can they do it in an easy to edit “group photo” page? And more importantly, not for the blog, but for self organization, can the others do decent facial recognition? No, not very well.

Yet Mylio was one I tried before, and at the time, I set it aside for later when I plan to process some photos from my mom. But if I’m going to the trouble of fixing all the metadata — and doing it right so I never have to do it again! — then I might as well have the biggest tagging aid working properly too for my own photos. Booyah!

While having Next Gen Gallery working and using Mylio to organize the photos before uploading are great, there’s always a catch, right? Of course there is. NGG doesn’t manage videos.

So? So, I have a fair number of videos of Jacob, for instance, embedded in my current gallery. Which works REALLY well, and I like it. Alas, NGG won’t handle video. And 18 months ago when I ran through a whole whack of gallery options, if it didn’t have an option for video, I killed it right away. 18 months later, I’m not as fussed about that. I can find work arounds, as long as I have a really decent photo gallery working that is fully integrated with my website. I have a couple of other plugins to automate my video management for me, but otherwise, it’s all good to go.

But wait, there’s work…lots and lots of work

Yep, it is work. Work that I’ve done before, in a sense, but I can re-use that work from before. Captions, album descriptions, consistent workflows, etc., it’s all saved on my site. So much so, that I have it nailed as a twelve-step process to get a gallery (what I used to call albums) up and running (a single month is a gallery, for example). Here is the process:

I wouldn’t say I’m completely satisfied with everything, but I do really like having it all in one install of WordPress rather than separate installs. Particularly as I often blog about events that match the photos — now I can embed the gallery and blog around the pics more easily than embedding separate photos as I had to before.

It’s a work in progress, as my blog always is. But I’m pretty satisfied with my progress so far. Ask me in a year when I get through all the galleries and get caught back up.