After my workout on Sunday, Monday was my “off day” and so today, Tuesday, was my day to work out again. The BowFlex comes with a number of suggested workout routines, and I started with the 20-minute Better Body workout. It has nine exercises, and they recommend doing it 3x a week.

Initial stretching. As I mentioned previously, I don’t have a good stretching routine set up yet and today was the clear evidence of that…I did some hip and quad stuff, some arm and neck, and a bit of back arching, but I’m hoping to get it down to a “known” set of exercises that I’ll do as opposed to having to think “which ones” at the time. That’s on my schedule to figure out for next week. I did manage to test out the work-out mat I got at IKEA awhile ago, and it was great. Extra padding so my knees weren’t screaming, but still took a bit more work than I would like getting down on the mat and back up again afterwards. Sigh. Baby steps.

Exercises. There are nine exercises suggested in the BowFlex manual. I started with the Bench Press (#01) that helps with the chest, and did 1 set of 10 reps @ 60 lbs. I really wanted to up it to 100 lbs, but I’m trying to keep the various exercises at the same weight throughout the routine so I don’t have to make many changes. My intent, for now, is that on exercises where 60 lbs isn’t enough, I’ll try more reps and focus on controlled movements. 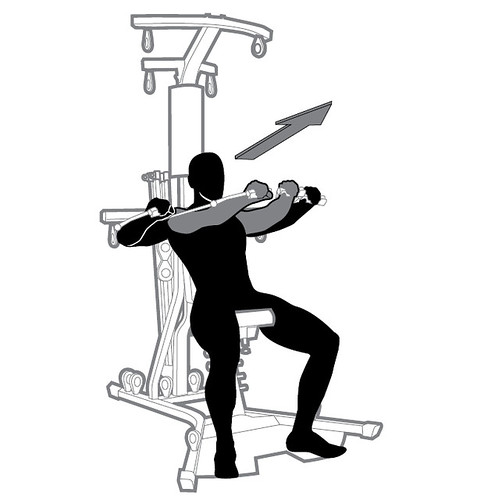 The next one on the list is the Narrow Pulldowns with Handgrips (#11). It’s aimed at the back muscles, and is also seated, but it requires turning around to face the machine AND switching to the top bar to be able to pull down on the grips. I ordered an extra set of grips (the machine came with two sets but there are 3 pulleys), and the new ones worked well enough. I actually like the grip a bit better (harder, knurled instead of foam). Same approach for weight – 1 set of 10 reps @ 60 lbs. Like the bench press, this one will likely need more weight or more reps pretty soon. 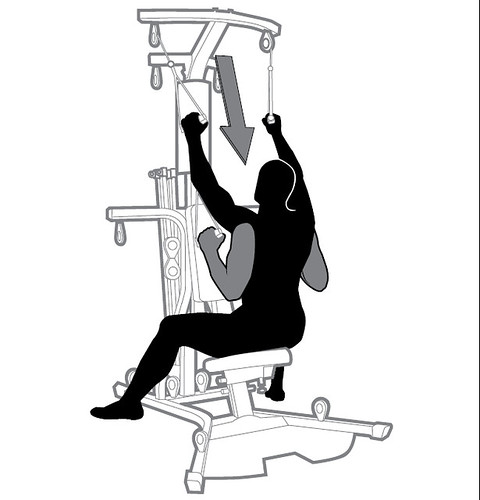 The third one is called Crossover High Rear Deltoid Rows (#04), and I confess I really like this one. You do it while standing facing the machine and using the top grips, so compared to the previous exercise, the only adjustment was to stand up. But the cross-over means that you grip the two handles and pull them across your body, almost like you’re grabbing something and ripping it open. I did my 1 set of 10 reps @ 60 lbs, and I feel that is about right for this one. The exercise targets the shoulders. 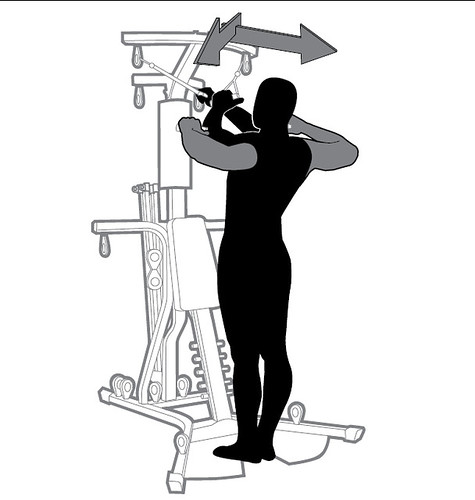 The routine then moves into arms with the Seated Biceps Curl (#16). The weight was fine i.e. 1 set of 10 reps @ 60 lbs, but the change from the last one is that I go back to sitting facing out, and I switch to the pulleys at the bottom (aka the squat ones). I found this one hard for form, and while I love the idea of increasing the weight and having an actual “real” bicep instead of the flab I have now that hides it, I won’t be increasing this one anytime soon. 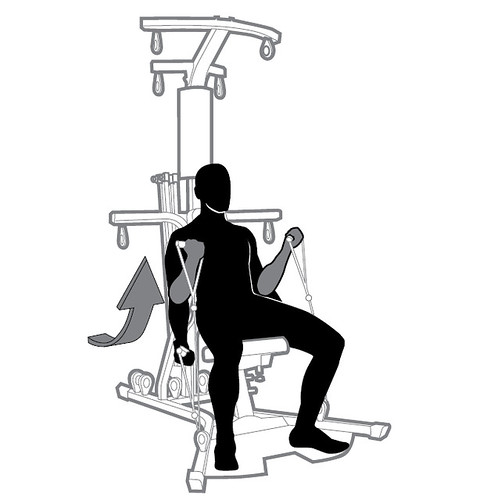 The exercise doubles up on arm exercises (as it does with legs and trunk to follow) and moves into a Triceps Pushdown (#14). Again, standing up, switching back to the top bar, which are two changes that don’t allow for a rhythm. I’m not entirely sure I’m keeping good form on this one, but I also won’t be increasing weight or reps either (1 set of 10 reps @ 60 lbs). 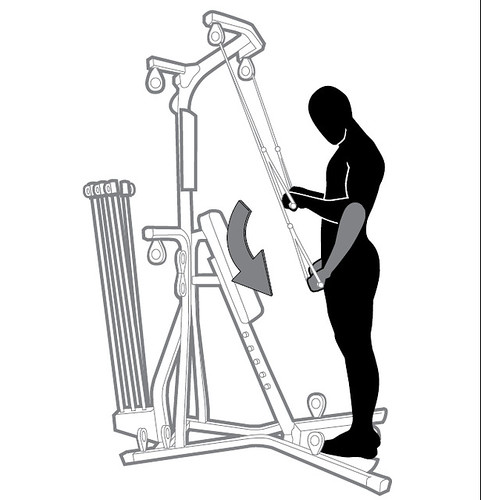 There are two leg exercises next, and I reordered one to the end and did the second one here. It’s called the Standing Hip Extension (#22). As you can see from the diagram, you’re supposed to put the grip in the arch of your foot and push it backwards while keeping the leg straight. You do one leg at a time, so it is 2 sets of 10 reps @ 30 lbs. And that is a solid amount of weight to start with, but the real challenge for me was my feet. I’m not very flexible, so to get my foot down there, lined up properly, standing back up, getting ready to go? Not really happening. With my shoes on, I couldn’t feel where it was on my foot; with just my socks on, I couldn’t get into position with the foot pulling back with my arch. But not to fear, there is a simple solution. You can put your whole foot through the loop so the grip is on the back of your ankle and do it from there. Again, as I said, I left it at 30, and I may have to reduce to 6 or 8 reps. Good for the butt, apparently, but only if your butt can take it. 🙂 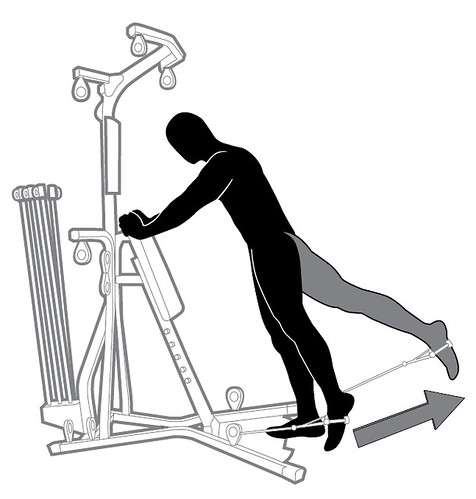 Next up were the trunk exercises and I started with Trunk Rotation (#19). On Sunday, I made the mistake of leaving it at 30 lbs each side, even though it clearly says NOT to do that i.e., start low. I thought 30 lbs WAS low, but not low enough. I struggled doing it with control, so today, I dropped to 15 lbs each side. Much better volume. I feel like this is likely a good exercise for me, similar to what a lot of people do with a medicine ball while sitting, where they basically move it from left to right and the person behind them picks it up and does the same. Then they reverse direction. It isolates it to your side abdominal muscles which are pretty weak for me. I don’t know that I will ever LOVE the exercise, but I’m fine to do it, at least safely. 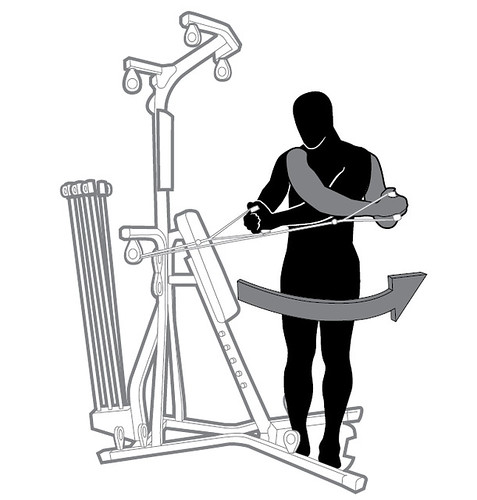 The last abdominal exercise is the Seated Abdominal Crunch (#18). I love the idea of crunches because they so perfectly target the abdominals. But when you’re as fat as I am, crunches aren’t a lot of fun. And while it is good that people are no longer doing full situps, I’ve never felt I was very good at my form for crunches. This is almost foolproof, which is great. I did my set of 10 reps @ 60 lbs and that seems about right for now. It’s about all my stomach can handle. Interestingly, this exercise and the bench press are the two that I feel will define my sense of success. If I am progressing on these two, I’ll feel like I’m getting somewhere, even if the rest are crap; if I’m not progressing on these two, I’ll feel loathe to picture anything as progress. I think it is a holdover of years of bad sports experiences — real athletes can do bench presses and crunches, and I can’t. 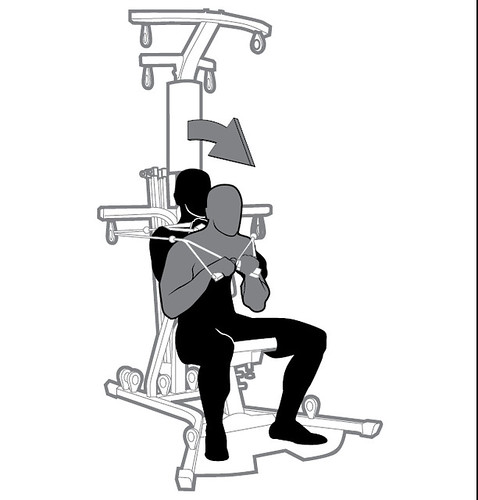 Last, but not least, is the Leg Extension (#20). While this one uses the squat pulleys too, it also requires putting the attachment on. It was pre-installed by the assembly guy, so I’ve never put it on before, and it was a pain in the patootie. I ended up having to get down on the floor and almost underneath it to see how it went in. I upped the weight to 100 lbs and did my set of 10 reps. But I didn’t feel like my form was very good to be honest. It felt more like a Macgyver-ed solution than that I had everything set up exactly correctly. It worked, but I wouldn’t say I was thrilled by it. And I think part of that is simple disappointment that I have to reconfigure for it at all, AND that it is the only exercise that uses that piece. So it will always either be the first or the last exercise. 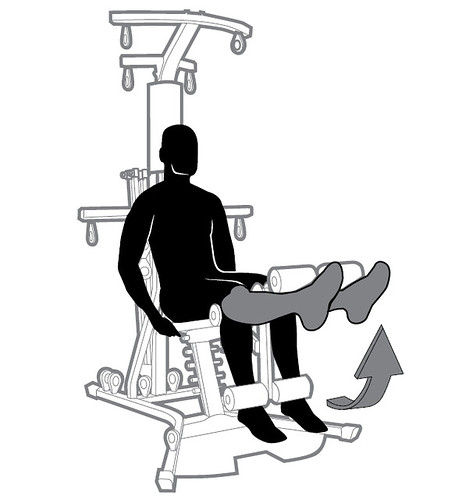 My form was a little better, I need to figure out my stretching exercises a little more coherently, but overall, it “worked”. I did it, I felt like I got a workout. It took me longer than 20m to figure it all out as I went, but I was able to do it well enough. I even managed to remember to hydrate! I should have done more for my cooldown, but I just ran out of time.

However, it was also relatively clear pretty fast that the order of the exercises has a lot of unnecessary movement and resetting. The order can be improved for efficiency, as long as I remember to rest in between exercises like I’m supposed to do. I think a good order would be:

In theory, it means having to adjust the weight only twice (after the first exercise and at the end) while also using the same grips in order — top bar, centre bar, and then the squats bar, before using the Leg Extension. If the leg extension is already in place, I can reverse the order and go bottom to top.

It wasn’t bad for my second workout. Onward!