Okay, so the heading was a bit cryptic to see if you clicked. 🙂 By “dasher”, I mean somebody who likes, designs and uses dashboards.

Obviously, the simplest dashboard is a to-do list. A simple list by itself doesn’t qualify — it shows info, but not status. But as soon as you add a check-box of some sort to show pending vs. completed? Now you’re in dashboard territory.

Those two elements — simple info plus some sort of metric — are the two essential elements of a dashboard. Some people argue that it requires a graphical representation, or an indicator of completion, but that is getting too close to specific forms of dashboards. Your car dashboard indicates speed graphically, which is true, maybe your tachometer in a graphical representation (both usually dials), but it also indicates if your headlights are on or how much gas you have, maybe what your tire pressure levels are currently registering. Even distance. Not all of those are “status of completion”, they’re just a metric.

For those who aren’t really into “planning”, they often think that anyone who makes a list is some form of planner. That the list i.e., the plan, is the most important part. It isn’t. True planners know that the most important part is not the end, but the means and the process. Just as military commanders know that no battle plan ever survives engagement with the enemy, a true planner knows that the value of a plan is the process that went into the actual creation. Knowing what troops you have, how you can deploy them, what resources they’ll need, etc. The end doesn’t justify the means, the means justifies the end product.

I have a huge to-do list, I confess. And it is divided into multiple categories so I’m comparing apples to apples when setting priorities, and into multiple columns for levels of priority within that category. Part of the benefit of that long list is to get it out of my head on to paper so I can easily see what I have in each category and which priorities I might want to tackle this week. But that “list”, even as a to-do list, is not really a dashboard because there’s no real element of it meant to be visual and it runs multiple pages.

To me, you have to be able to see the entire dashboard at a glance. If you can’t, you can’t tell quickly what’s going well and what isn’t, or where you might want to give more attention or take your foot off the gas in another. As such, when I’ve played with my to-do list, I’ve also often had a one-page summary at the front. While it is a dashboard of sorts, it is overly detailed (lots of priorities, not much info) and extremely simplistic (mostly checkboxes). It doesn’t inspire me in any fashion, I don’t look at it and go “There! THERE’s where my attention should be this week!”.

For my attempts at increasing my workout routine, I created a couple of different types of dashboard. The first two are more like info posters than true dashboards, as I don’t modify them regularly. They are overviews for my stretching and workout routines, including the pictures of the exercise for easy memory, and the # of reps or weights I’m using for each. It serves more as an instructional dashboard to get me through the routines than to tell me how I’m doing. It has info and metrics, but it isn’t a “management” tool so to speak. It just tells me where I’m at currently.

I created an actual dashboard for my health, which DOES include a lot of other measures, and which I can update monthly. I’ve even added a basic street-light-inspired heat map of progress – green is good, yellow is caution, red is cause for attention. 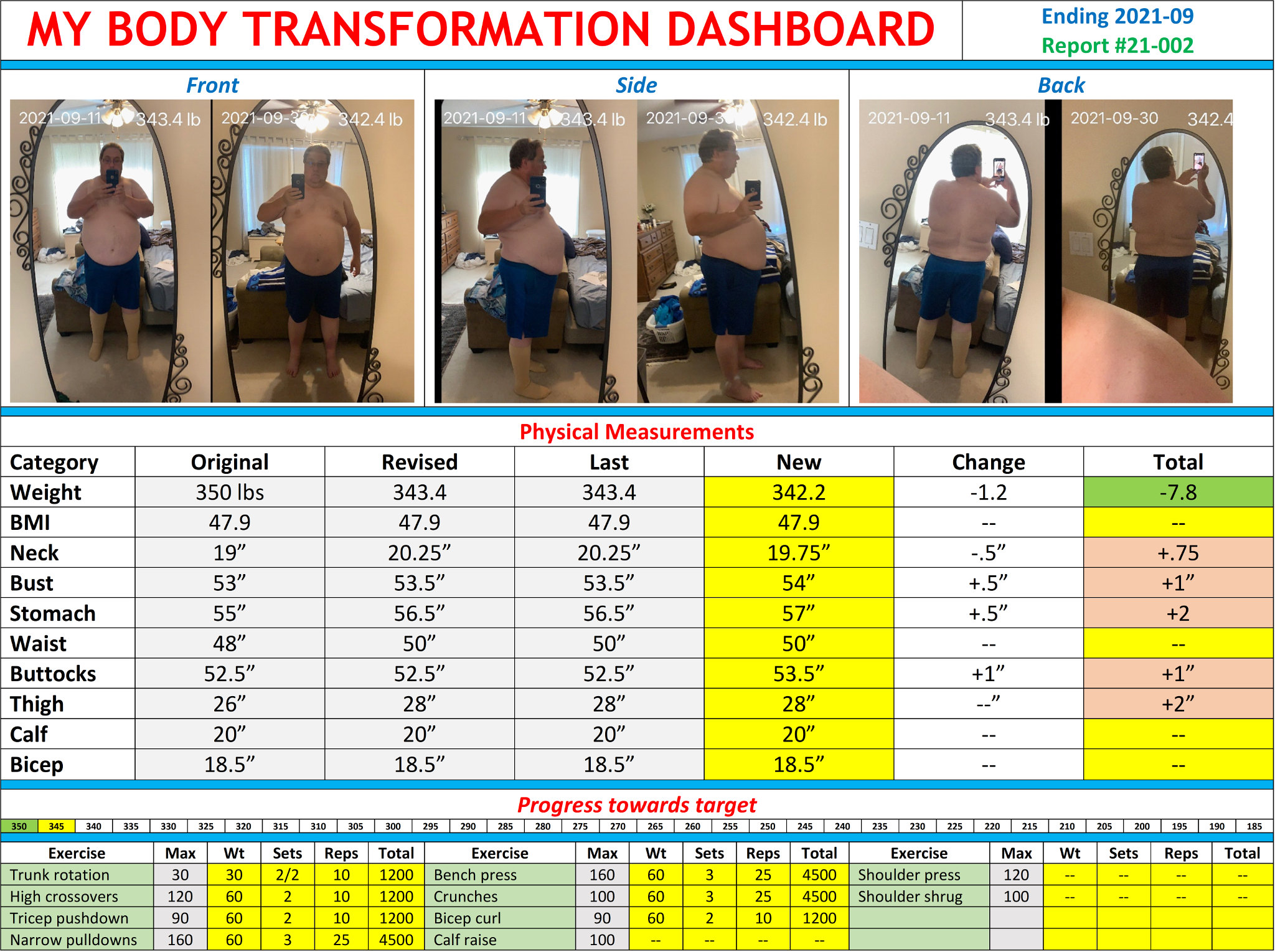 I’ve only used it for one month so far, and I ran into some other challenges this month unrelated to the content of the dashboard, so it will take some time to know if this is the right set of metrics going forward.

But I felt I wanted and needed a new dashboard. One that would help me with my writing goals. I focus a lot of time and attention on the content of my websites, but I rarely think about it terms of actual “goals” or “metrics”. I liked it when I hit 500K words, and again when I hit 1M. My visitor stats go up and down, and while I’m regularly above double digits, another week comes along, and I barely have single-digit coverage. I’m okay with that, partly as I am not blogging to become famous, build a brand or run a business. I’m posting what I want, even if it isn’t completely “brand-friendly”.

I have a post coming tomorrow that will talk about a series of posts in November, but I wanted to see “where I was”, a snapshot so-to-speak on my writing goals. 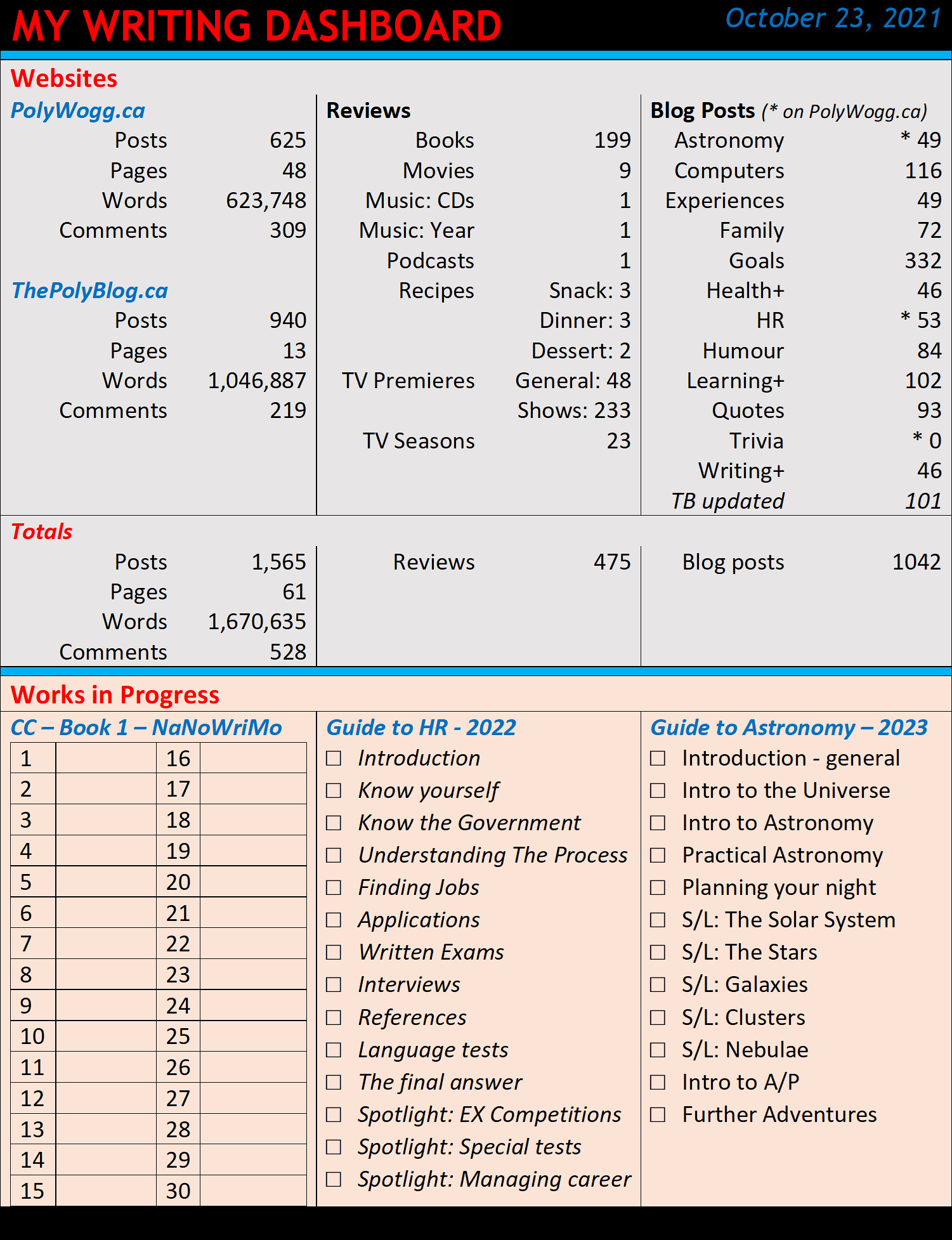 It is NOT very sophisticated, I admit. The top part is really just a current status of how many words I’ve written or the number of posts. When I split my website into two — PolyWogg.ca and ThePolyBlog.ca — I lost the combined totals showing up easily. I knew I was over 1.5M words, and over 1500 posts, but I had not tried to calculate a combined total recently (1.67M words + 1626 posts and pages), plus 528 comments. I suck at engagement, but hey, it’s something. I was also curious to see that my “blog” posts, albeit spread across two sites, is at 1042 by itself. I hadn’t really thought of extracting that number from the data previously. But this post, for example, is exactly that type of post. It’s not a review, it’s not a page, it’s just me blogging about, well, me.

And movie reviews, some of that is format, design, time, lack of priority, but less than 10? Wow.

Yet I rarely think about what I am doing instead. A couple of music and podcast reviews, but almost 50 related to “general TV watching” and predictions of where shows will go or get cancelled. Huh. And then the real kicker.

I have 233 reviews of TV premieres and another 23 of full seasons of shows. What? I have MORE full TV reviews than I do book reviews? Really? When did THAT happen? Apparently, almost two years ago, and I never even noticed. I have never really thought of them as full reviews as they are more breezy and less structured. Yet I’ve generated 250 of them without even blinking in the last 8 years. Yet I never give myself credit for it.

At the bottom, I just added references to my current works in progress. I wrote it as if I knew what I was going to write about in November, a novel in particular code-named CC, or two other guides that I count as “works in progress”. I’m still debating which I’m going to use November to blast through. My HR guide isn’t really amenable to the next phase, but I might choose it anyway. I don’t feel like I’m ready for the Astro Guide in full yet, but the novel isn’t quite right either.

For now, I listed two types of metrics — word counts in one area, and table of contents as checkboxes in another.

As I said, the dashboard isn’t quite right, but it doesn’t have to be. The point of doing it was to push my planning a little farther from a simple to-do list and more towards thinking about actual outputs in my writing. Just gathering the data gave me a couple of surprises and a new way of thinking about what I am doing as a writer and where I want to expend my energy.

It’s not the prettiest dashboard, but it does give me #MoreJoy.